1.why it is important to study this area, and Will you have to collect data for your investigation?

2.How will data be collected?

3.Will you use secondary data (collected by other researchers or available through databases)?

4.Will you have to run lab experiments to collect data?

5.Will you conduct field work?

6.How will these lab experiments or field work be set up?

7.What measuring instruments will you use?

8.How will the collected data be analysed?

9.What comparisons will be made?

10.What variables will be investigated / correlated?

11.What calculations will be made (show formulas to be used if necessary for better understanding)?

13.Will you interview people / conduct a survey?

14.How will these interviews be conducted?

15.Will you need ethical approval for the survey?

16.Will you use computer modelling and simulation in your analyses (describe your models)?

17.Will you conduct a literature-based research?

18.What will you look at in the literature and what comparisons and analyses will be made?

19.Have you linked your methodology with your research aims and objectives?

An earth road is one whose wearing surface and foundation include specifically natural soil present on a given site during the construction by Civil Engineers. Soils can be categorized as cohesive soil and less cohesive soils depending on the engineering properties. It is noted that areas that are clayey periodically do not normally have sandy materials. Clays are considered as significant and normally determines the composition of the soil since it has dual qualities that are objectionable that make it the most upsetting of the materials to be handled during the construction of structures (Alfaro, 2009).

The clay soil swells when subjected to wetting and then shrinks during drying. It is for these reasons why the foundation soft structures built on top of the clay soil normally collapse during advanced weather conditions such as extreme rains and then followed by an extremely dry period. This research proposal is about the techniques that can be used to improve the soil when constructing and designing a foundation that would be used in the construction of structures such as roads, bridges, or other superstructures such as stadia (Bell, 2012).

The soil improvement process is a very significant step during the initial construction and also during the foundation improvement of the already completed structures. The general outcome of the soil improvement may be improved water condition, reduced permeability, reduced compressibility, and increased strength (Committee, 2009). The soil improvement techniques seek to enhance the soft soil conditions through fixing soil particles and masses, reinforcing, and compacting. There is also need for improving the soil under the heritage and historical buildings without affecting the already damaged foundation bearing capacity. These historic buildings form a major aspect of civilization hence cannot be demolished (Hansbo, 2010).

Some of the technical terms used in this research proposal include chemical stabilization, stone column, preloading, soil replacement, soil improvement, and jet grouting. Soil replacement involves the replacement of poor soil such as soft and medium clay or organic soils with a more competent material such as crushed stones, gravel, and sand. Precompression involves placing a surcharge fill on the top of the soil that needs consolidation settlement (Hawkins, 2009). Soil improvement involves the alteration of the property of soil so as to improve its engineering performance through either permanent measure to improve a structure already completed or temporary process to enable the construction of a particular structure. Stone columns are stone materials used in cohesive soils to speed up consolidation, minimize excessive settlement, and improve the shear strength of the soil (Johnson, 2011).

Silts and clay are construction materials of low-grade which find application in impervious elements like cut-off, dames (cores) since they are poorly drained, and they swell and shrink. Clay soil also loses its strength when wet and also is characterized by high compression strength and result in an undesirable settlement when used as highway subgrades. Sand despite having excellent drainage properties as also not appropriate since they do not have cohesion and laterally spread when vertical loads as applied. Therefore, these tow natural soils alone cannot be used as foundation materials in road construction or foundations basement.

A material that is stabilized may be considered as a combination of a given precise combination of aggregates and binder-soil obtained preferable neat or at the stabilization site, and then compacted so as to persist in its state of compaction without unfavorable change in volume or shape underexposure of adverse weather conditions or a weight of a structure or a force of traffic (Joshi, 2009). Numerous materials have been used as agents of soil stabilization. Out of these agents, the best stabilizer should be the one that provides a durable effect and involves low cost. Soil stabilization is normally applied in the soil of road construction and is known as granular stabilization or mechanical stabilization.

The application of appropriately proportioned materials is of specific significance in the roads constructions. The principle of soil grading can be used for sub-grade soil improvement of low capacity bearing, through the addition of materials possessing lacking particles sizes such as clay sub-grades can be added to sand and also sand added to clay sub-grades. The methodology of the proposed soil improvement techniques that may be of significance in the field of civil engineering and are discussed below include soil reinforcement, chemical stabilization, grouting and injection, consolidation a precompression, vibration method, drainage method, and surface compaction (Kirsch, 2012).

The grouting technology has become a common method of ground improvement and is normally used for underground and foundation constructions of structures such as houses and bridges. The grouting process involves filling cavities and pores in rock or soil with a material that is liquid in nature so as to improve the shear strength by improving the cohesion and minimize the permeability (Kwong, 2011). Some of the classifications of grouting technique include jet grouting, grouting of voids, compaction grouting, displacement grouting, and penetration grouting as shown in the figure below: 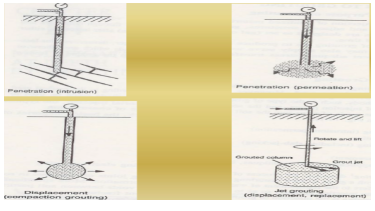 This is a method of ground treatment in which grout is injected into a medium that is porous without disturbance of the initial structure. Any material of grout can be used during permeation grouting, however, there should be a limit of the mixture of grout applied for a given rock o soil type. This method of grout technique is applied to enhance the liquefaction potential, improvement of excavation character in sands, and improvement of the value of foundation bearing (Maity, 2017).

This is a technique of ground treatment that entails injection of soil cement grout of thick-consistency under pressure into the mass of soil, then consolidation, and densifying the soils surrounding. The grout mas injected conquers space produces by the pressure-densification. When injected into bedrock or soils which is very dense, there will be confinement of compaction grout since the material surrounding is dense. This method is normally applied in pile repair, augmentation pile capacity, easing of liquefaction potential, relieving and raising of foundation and structure elements, and also densification of foundation soil (Moseley, 2013).

This is an erosion-based system where grout and soil are hydraulically mixed to produce situ geometries of silcrete. Granular soils are known to be the most plastic and erodible clays. The rotary drill is applied so as to attain the design depth required and at that point, air or water and grout are pumped to the drill rig (Nicholson, 2014). There are three different systems of the traditional jet, these include a triple-fluid system, double-fluid system, and single-fluid system as shown in the figure below: 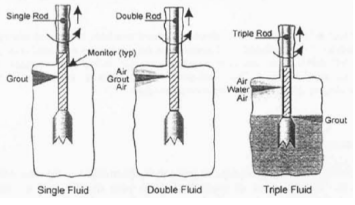 Sand drains as established by drilling holes through the layer of clay by the use of continuous flight auger or rotary drilling. The holes are then filled by the use of sand. When a surcharge is applied at the surface of the ground, the pressure of pore water in the clay will rise, and it will be distributed by drainage in both horizontal and vertical directions. Hence accelerating the settlement (Purushothama, 2014). The rand drains reinforce the soft soil in which they are installed in.